MWC 2018: Same old themes, but the prospects are exciting

Snow, cold weather, flight cancellations: This year’s MWC certainly had its challenges. Perhaps the lack of the usually reliable sunshine left visitors a bit gloomy, but it may also have been the lack of exciting news… as a regular visitor, the 2018 event definitely felt a bit nondescript compared to the buzz of previous years.

Of course, there were the usual buzzwords being touted but no new themes are currently emerging. Instead, what I saw was steady progress across all the major industry topics.

Most prevalent, perhaps, was 5G, with the first rollouts and real-life applications now finally within reach. Competition amongst providers is stiff and some were being very vocal. T-Mobile, for example, announced that it has plans to build out 5G in 30 cities, while Sprint says it will have more licensed spectrum than its competitors’ rollouts, and will add more 5G markets in the coming months.

However, European users may have to be patient for a little while longer. The move to 5G is currently mainly led out of the US. If the Mobile Economy report published by the GSMA proves to be right, there will be 1.2 billion 5G connections by 2025, but with the majority of connections in China, the United States, and Japan and only a smaller percentage in Europe.

Apart from the excitement over much faster mobile broadband – which we as users should all feel the impact of – 5G data speeds will enable new, connected Internet of Things (IoT) applications. For me, that’s where the real innovation potential lies and some of the use cases shown at MWC by the likes of Bosch and Intel revolved around manufacturing, healthcare and smart cities, where IoT applications can revolutionize whole industry areas. However, it also became clear that much work still needs to be done on industry standards.

Connected devices were, unsurprisingly, all over the show floors, with Qualcomm showing chipset innovations to power AI and connected cars, and Deutsche Telekom showcasing a BMW E-SIM demo that allows drivers to use their existing mobile phone data plans and access information services in their vehicle, basically turning the car into a mobile device. As the first autonomous cars hit the streets, it will be interesting to see how network operators benefit – so definitely a space to watch.

Artificial intelligence, predictive analytics and machine learning were other key themes throughout the show – again, topics that have been in the spotlight for years. So, what’s new? The discussions at this MWC were mostly centered on how these technologies will improve network management and facilitate network transformation over the coming years, but also how they will allow providers to improve their customer interactions, through chatbots for example. Some providers, including Telefónica and Orange, are already moving past the chatbot and introducing automated voice assistants. Customers’ expectations are changing fast and the younger generation is very much open to interacting on new channels, so this is an interesting trend. The question remains though whether the telecoms industry will be able to make a mark in the AI space, with Google hiring all the best talent out there!

What else stood out for me? A notable lack of internet players, as well as a lack of wearables, although I did notice some new applications of smart glasses in an industrial context.

When it comes to devices, there certainly were no killer announcements – perhaps with the exception of the Samsung DeX Pad docking station, which turns the new Galaxy S9 smartphone into a working PC and allows users to have an Android-based desktop experience on any monitor. Handy.

So, the key themes for 2018 remain 5G, IoT & AI. Barcelona held few surprises apart from the terrible weather. Still, I am sure the sunshine will be back next year and I am looking forward to seeing what’s new at MWC 2019. 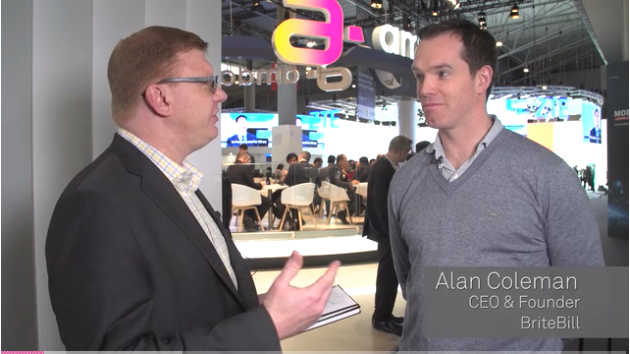 Alan Coleman, CEO and Founder of BriteBill, shares the latest innovations for customer billing and the opportunities to create more proactive communications.